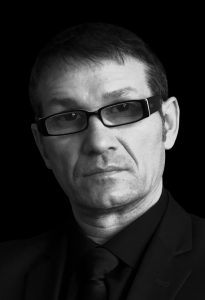 Every human being must have a utopia. Not to change the world but to live with himself in a continuous dream of ascension. If, traditionally, utopia, unachievable due to its very existence, supposes an ideal, a positive order, dystopia is realized as the opposite, not as a dream but as a vision, in which the possible worlds overlap and give rise to parallel, hybridized existences and the crossing of the border between good and evil lies in the choice of each character. The usual affiliation with the masters of soul disorder, from Bosch, Grien, Brauner, to Chirnoagă and Till Rabus (on which, generally, the art specialist draw the roots of Sergiu Grapă’s art, somewhere in between and always above and beyond), only amplified and individualized his language.

Sergiu Grapă’s creation takes you on two great journeys, from which stories branch and intersect, a world in which superficiality, masks, cowardice and lack of humanity takes the shape of pseudo-human beings and another in which the artist graphically confesses his entanglements, metamorphoses, getting into the skin of characters who subtly indicate a moment in time (a code imprinted on the leather shirt), or a longing.
Regardless of the mediu he chooses, easel graphics or digital, the technique only articulates or enhances the message, without altering the content. The corpus of his creation is not only the result of imagination, but of interpretation in the current data of civilization, in which good, beauty, feelings, coexist to merge with inequity, helplessness, pettiness, generating a unitary whole that acts like a radiography of the human. The fantastic lives in a perfect fusion with the real, in which the tentacles of the imagination continue those of reality, floating in times not yet physically consolidated, acting through forces that seem to lurk compromising the vulnerability of reality, opening a gap in time and man („Surrogate ”,“ Flight in cage ”).

Avoiding the possible trap of easily moving from the observer-creator to moralist, Sergiu does not get caught up in the confrontation between his own opinion and the action that takes place, through which a possible reality displays its product, preferring to let the story unfold alone, so alone that, if you look better, in each pieces an allegory is born and continues in the next. From the personification of the man-cello who plays without sound, in oblivion and sacrifice, to the one handcuffed in the outer skin caught as a straitjacket on the hybridized personality, to a new aesthetic of the ugly and hyper-consuming appearances that lead to treating the person as framed and chained trophy, like a circus animal, a possible metaphor in terms of self-acknowledge, to flashy appearances, that “undress” parts of their character, to reinterpretations of art history (“Pieta”), Sergiu records the uncertainties or ankylosed realities.

If in digital graphics, in addition to the technique per se, the colours vibrate and differentiate the different levels of significance, in the classical ones, its lack or neutrality or its appearance as accents, intensifies the drama of the representation, letting the illuminations take place, gradually, in the mind of the viewer.
However, the artist does not insist on the essence of degradation, nor does he seek a diagnosis of the facts, but rather suggests, inserts clues on an unspoken ideal while visually describing his own feeling and thinking. Whether the world dehumanizes itself by its own flaws, the involution being mechanization, or it forges new gods, new values, again, through hybridization, the apocalypse only hovers when there is still salvation. At the same time, Sergiu opens new, revealing perspectives on the real, which the artist does not cut as an irremediable compromise, but offers the possibility to recover. Because for the artist the fantastic is the invisible part of the mirror, the one that, although in obvious opposition to what we understand as real, is the tap that amplifies the experience of the image, experience that proves to us, the viewers, that we are still Humans.

The graphic artist Sergiu Grapă (b. 1975, Romania) successfully fits into the surrealist style, in which he asserted himself in the last 25 years of activity.

In his works, dreamlike constructions, infernal and nightmarish hypostases, Freudian allusions or mythological themes predominate. In an imaginative vision – decanted in motifs and symbols, doubled by the creative formula of computer art that essentializes the drawing with precision of detail and chromatic refinement – the entire scaffolding of faces, characters and scenes unfolds, defining what is surrealism in its substance: obvious figurative antinomies in the juxtaposition of visible things, recognized in the natural order of the world, but realizing, at the level of the plastic image, new, unpredictable, disconcerting, ambiguous and mysterious relations. Both the conception method of Sergiu Grapă are marked by the unusual, absurd and hybrid associations, suggesting additional determinations to the viewer, hypothetically modifying his appearances and disturbing the conventional meanings to give him the original image of “possible worlds”. This proteic and cumulative spectacle, full of plastic acrobatics and dream-hallucinatory visions in the forms of the most meticulous and academic “trompe l’oeil”, is based, in fact, on figurative metamorphoses and syntagmatic proximities that damage the logic of common sense and the habits of discursive knowledge. But the inner logic of surrealist creation, the expressive fiction of these absurd universes that exude exotic fascination and pleasant uncertainties, generously offers intuition and aesthetic knowledge, beyond the approximate verbalization of visual appearances, in a consistent and global “epistemological metaphor”.

A dominant note, however, is sensed, this time, at the level of symbolic motifs in the composition of the works, the artist highlighting characters who obsessively illustrate modern machinism and the “technological dehumanization” of contemporary society. People look like robots, and their relationships, in terms of reduced associations to the couple or duet, cut out empathy and human communication. Even the artist’s self-portraits, ironically malformed and terrifying, seem to come from the enigmatic area of fantastic narratives. Whether we have scenes with mythological characters, or we encounter humanoid beings in impossible contortions, with disarticulated anatomies and metamorphoses of science fiction, each time we are captured by these “dream frames”, causing amazement, questioning and anxiety. These utopian scenographies of the surreal are as many improbable projections in the volcanic and inexhaustible imaginary of the artist.

Thus, S. Grapă offers us his amazing and hermetic show, urging the viewer to adjust and to feel emotionally the load of possible meanings in the visual syntax of his paintings.